Here is a guide on how to sail a Dragonfly Trimaran in stronger wind conditions, focusing on reefing the headsail, reefing the mainsail and how hard you can push the boat.

When wind conditions reach 20 knots it is time to reef the mainsail.  To reef, you will need to head upwind.  This is because, if you were to reef while sailing on a reach or downwind the boom could get tangled behind the side stays.

On the Dragonfly 28 there are two reefing points, Reef 1 and Reef 2.  Both are a single-line reefing system, leading from the stopper up, to the foot of the mast, up to the reefing point on the luff of the sail, back down inside the boom, along the boom to the leech reefing point, and then it is tied off on the boom near the clew.

You will then need to reload the headsail sheet onto the winch, putting around a few turns, taking in the slack, and gently re-opening the stopper.  This means that you are ready and able to tack when needed, which should always be considered for safety reasons.  Pull in any slack from the other reefing line so that the lines are not flopping around at head height.

Helpful note: To make things easier, we recommend putting marks on the halyard, marking Reef 1 and Reef 2 so you know how far to release the halyard when reefing.  This means that after pulling in the reefing line, you don’t need to go back and re-tension the main halyard, which when racing for example could lose you precious time. 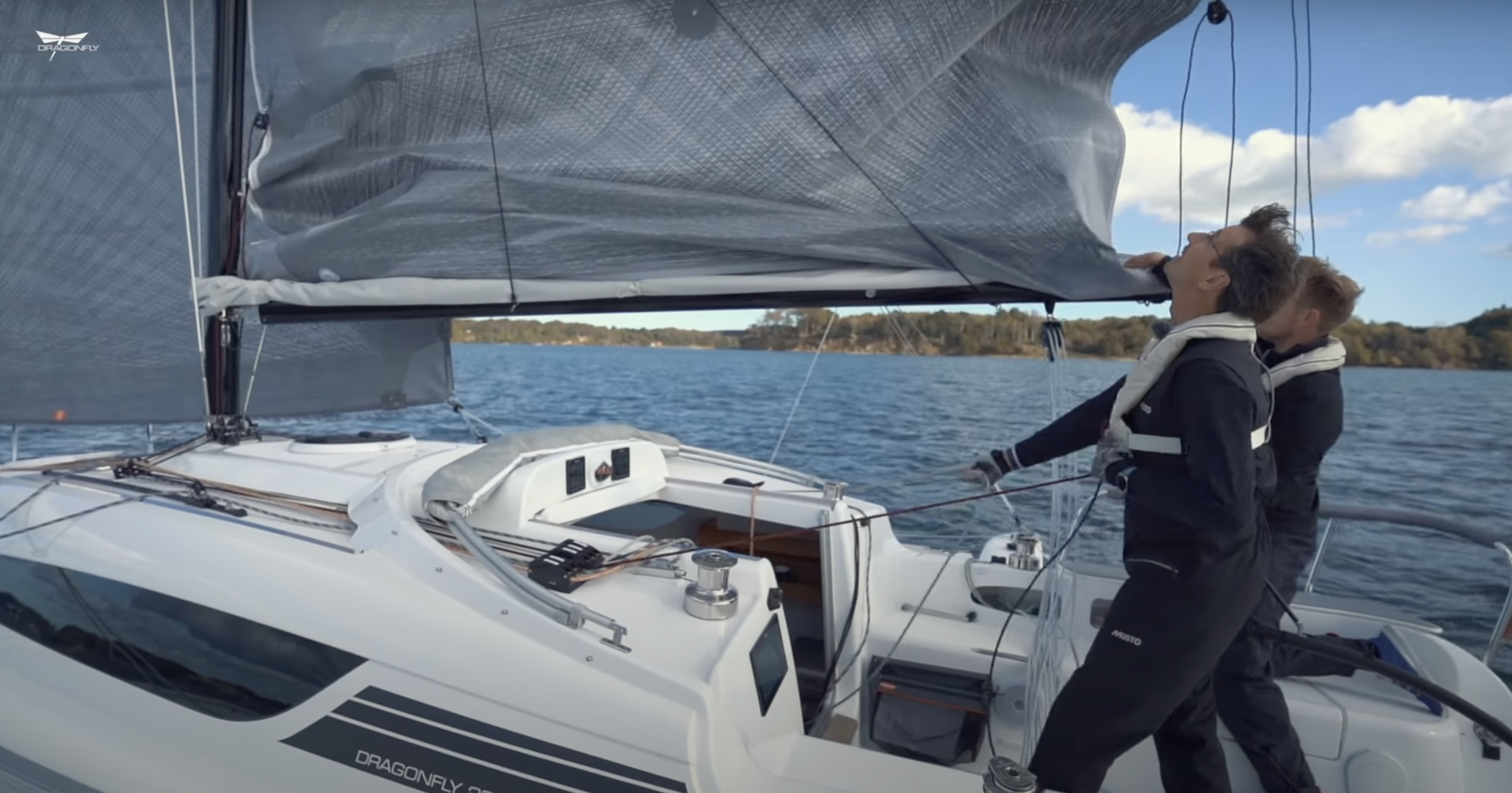 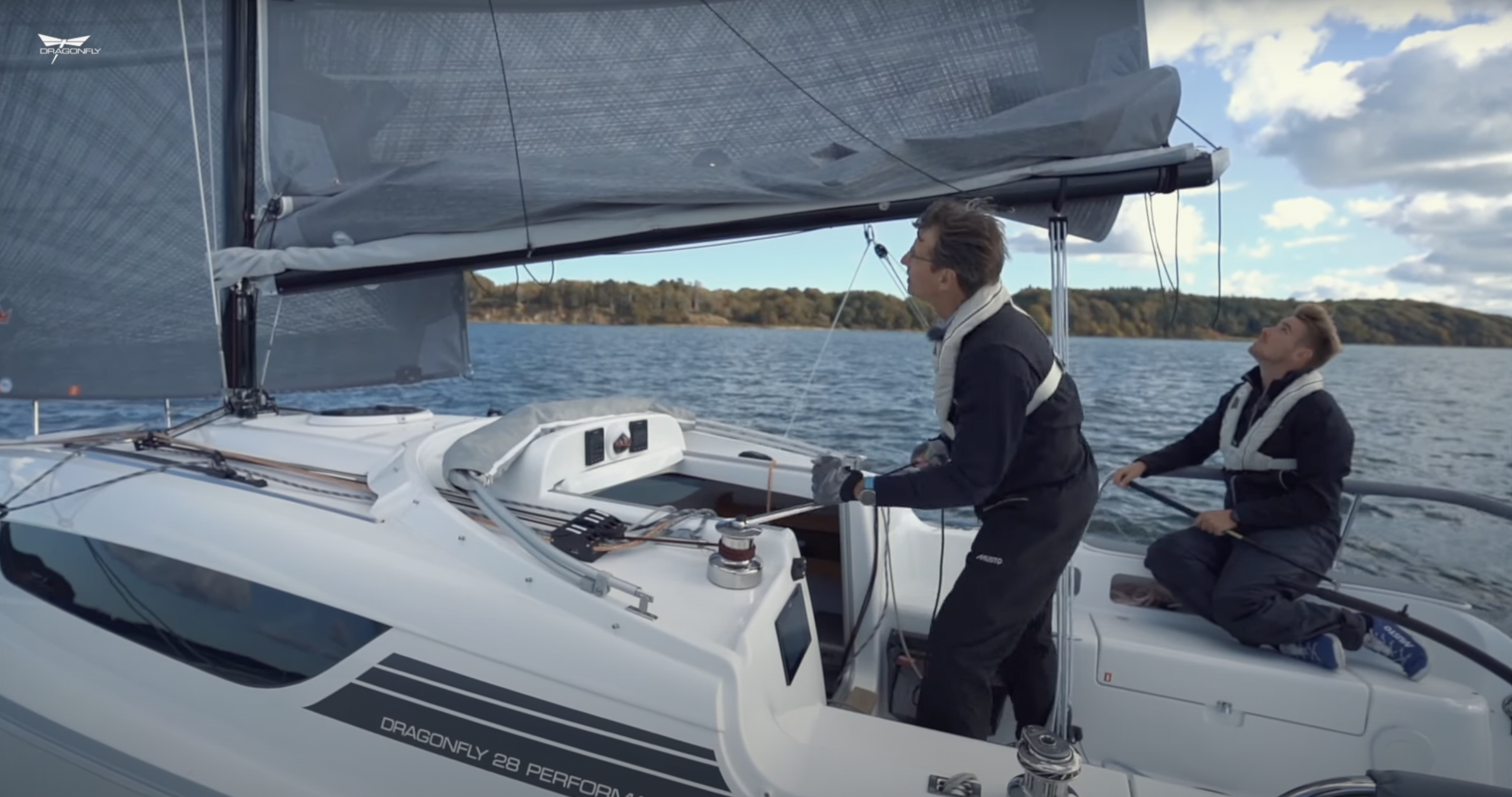 The headsail is on a roller reefing system. Each Dragonfly headsail has markers on the foot of the sail, indicating the recommended reefing points.  The sail can be reefed in any position, these points are to help you in knowing how much sail is out.  The smaller Dragonfly Trimarans have 2 reefing markers, and the larger boats have three markers.

Important note:  When you reef the headsail it is important to move the car forward the same distance so the angle of the sheet between the clew and the car remain about the same; otherwise you will damage the sail and/or the aluminium forestay.

To reef the headsail, release the headsail sheet and move the car forward to line up where the clew will be.  Pull on the roller reefing line to furl the sail until it reaches one of the reefing markers.  To use this as a storm jib, continue to roll up the headsail until you are comfortable with the amount that is out.

Dragonfly Trimaran headsails are very high quality and are the best on the market. However, they will naturally stretch a little with use.  For this reason, there are leech and foot lines, where you can undo the velcro pocket and adjust the line until the leach or foot of the sail has been re-tensioned adequately.

A quick tip:  To set up consistent reefing points that can be adjusted quickly (for example when racing), we recommend marking on the deck where the car should sit at each reefing point. 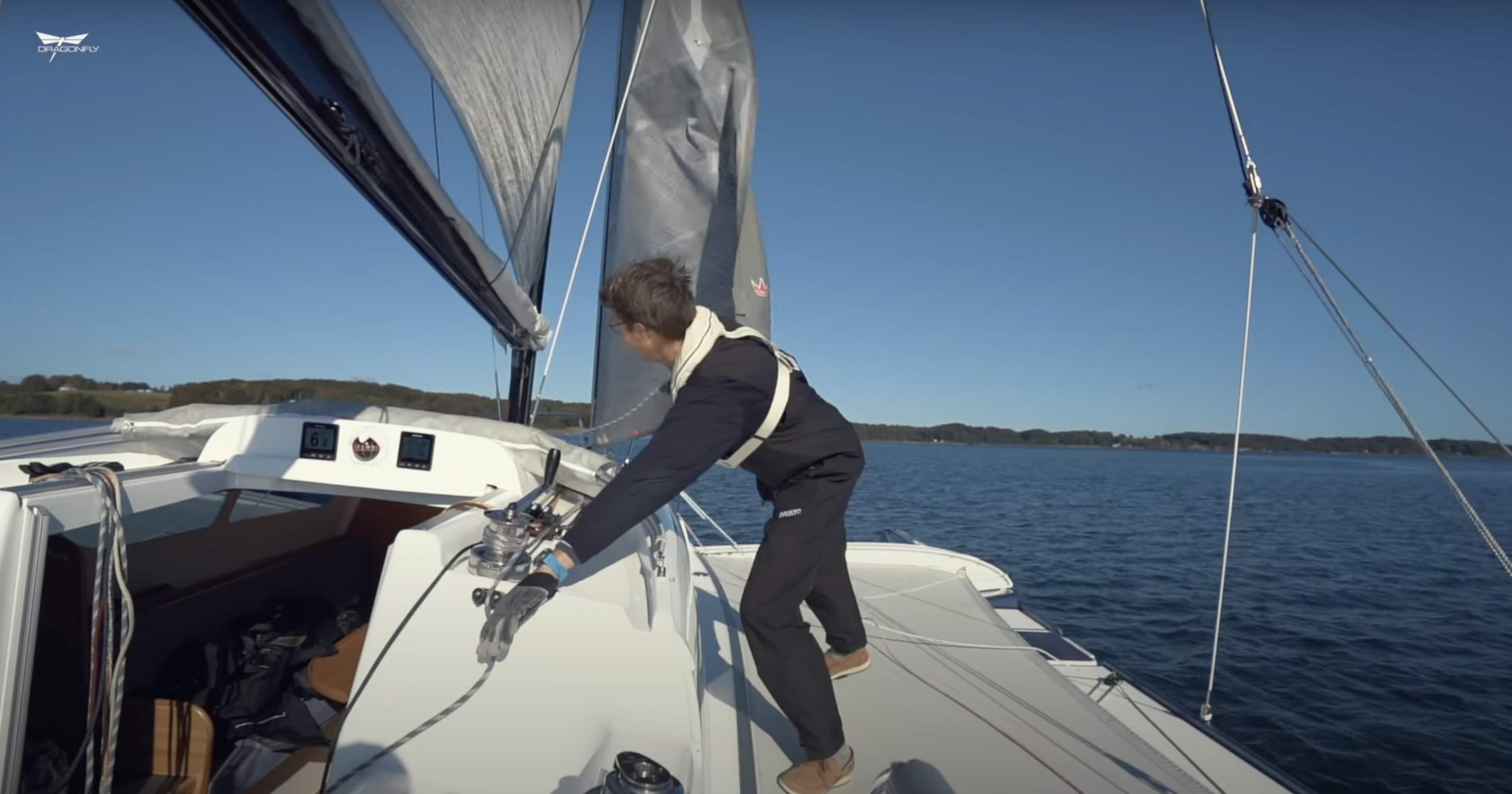 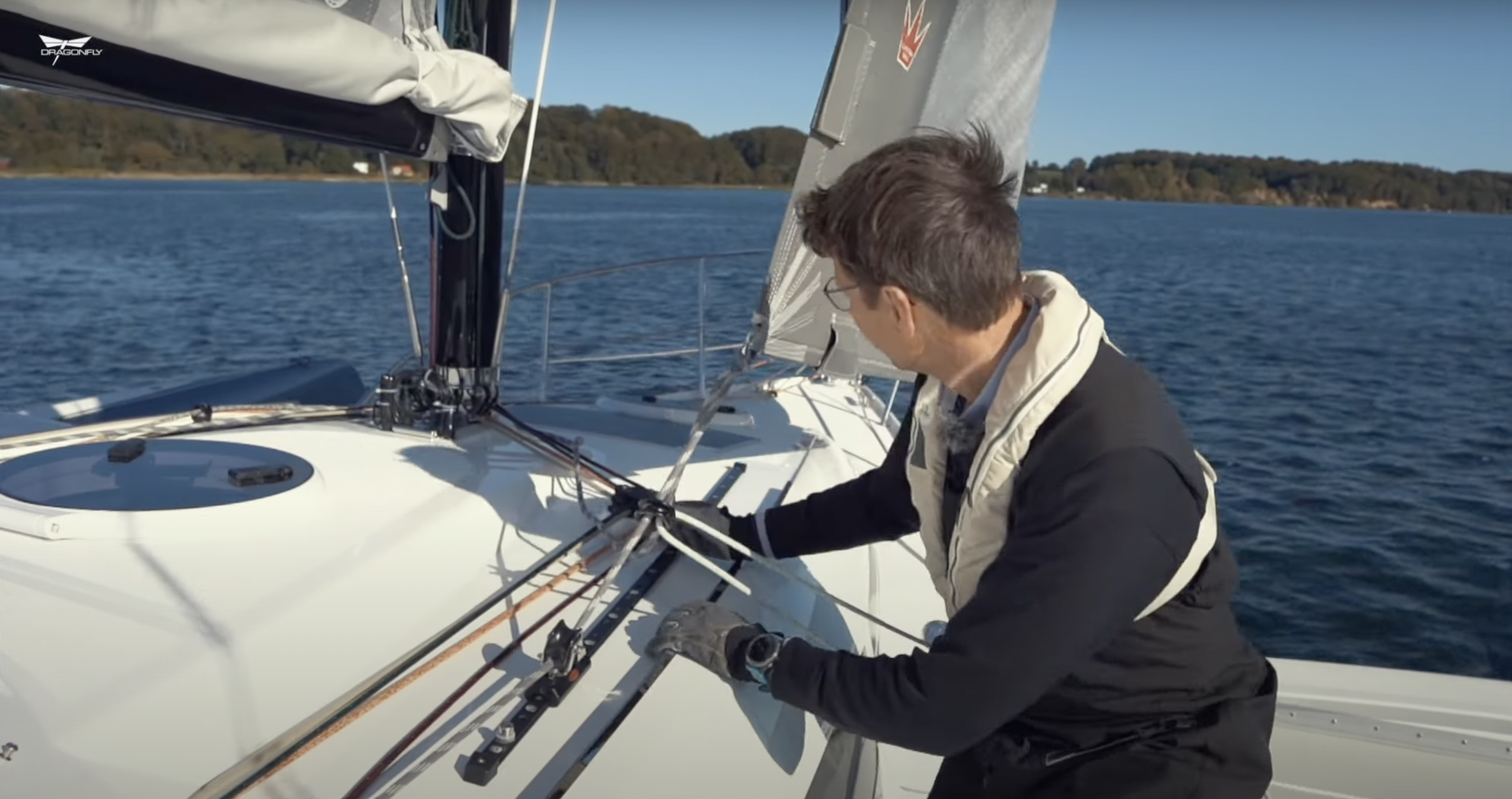 How hard you can push the boat

If you are comfortable sailing multihulls, you can sail in up to 20 knots with full sails.  If you are new, try reefing around 17-18 knots to keep control of the boat and feel more secure.  The floats can be pushed down until only approximately 10cm is sticking out of the water, they can not be submerged.  Once you are close to 10cm of freeboard, it is time to reef the sails.

Like any other sailing boat, if there is a gust of wind you can either point higher into the wind or release the mainsheet to dump some power out of the sails.  By releasing the mainsheet allowing the mainsail to twist, the loss of power in the mainsail can allow you to continue under full sail at up to 22 knots.  If there is a squall coming, or higher winds for a short amount of time you could just reef the headsail to Reef 1 and release some of the mainsheet.  If the stronger wind has set in, you will be more secure if you reef both sails.

Keep in mind, that by having too much sail up the boat will not sail faster.  Make sure you are in control of the boat, not that the boat controls you.  Because Dragonfly Trimarans do not heal over like a monohull and there is a lot of power in the rig, the ability to reef quickly using the single-line reefing systems is essential.

When sailing with a spinnaker, you can sail on a beam reach (with a true wind of 90 degrees to the hull) in up to 10 knots of true wind speed.  When the wind picks up, there will be too much power in the spinnaker, and you will need to bare away or ease the sheet.  In 15-20 knots, you will need to pay more attention to avoid nose-diving.  Keep a close eye on the leeward float as it approaches water level to bare away.  If the centre hull starts to nose dive then you really need to back off.  Just keep an eye on it and be ready at all times to bare away or release the sheet.

The wind conditions in open water will generally be more steady, and in coastal waters, the wind will be more gusty.  Keep the sheet in your hand and be ready to bare away.  If you feel comfortable with the spinnaker, you can sail downwind in up to 20-24 knots.  When sailing with the spinnaker, it is essential that you always mark sure you have enough clear water and distance to leeward to be able to bare away at any time or to take the spinnaker down if needed. 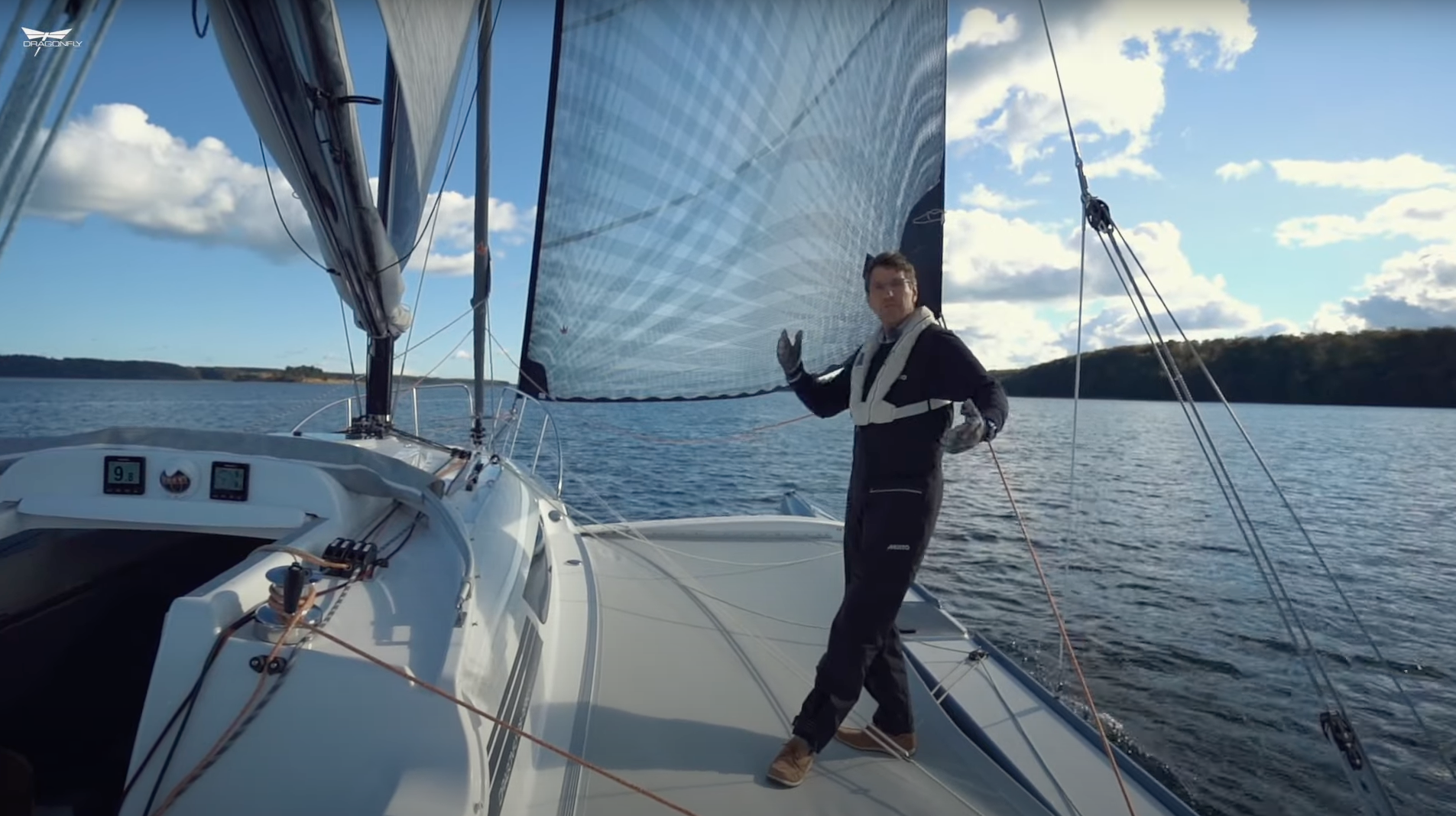 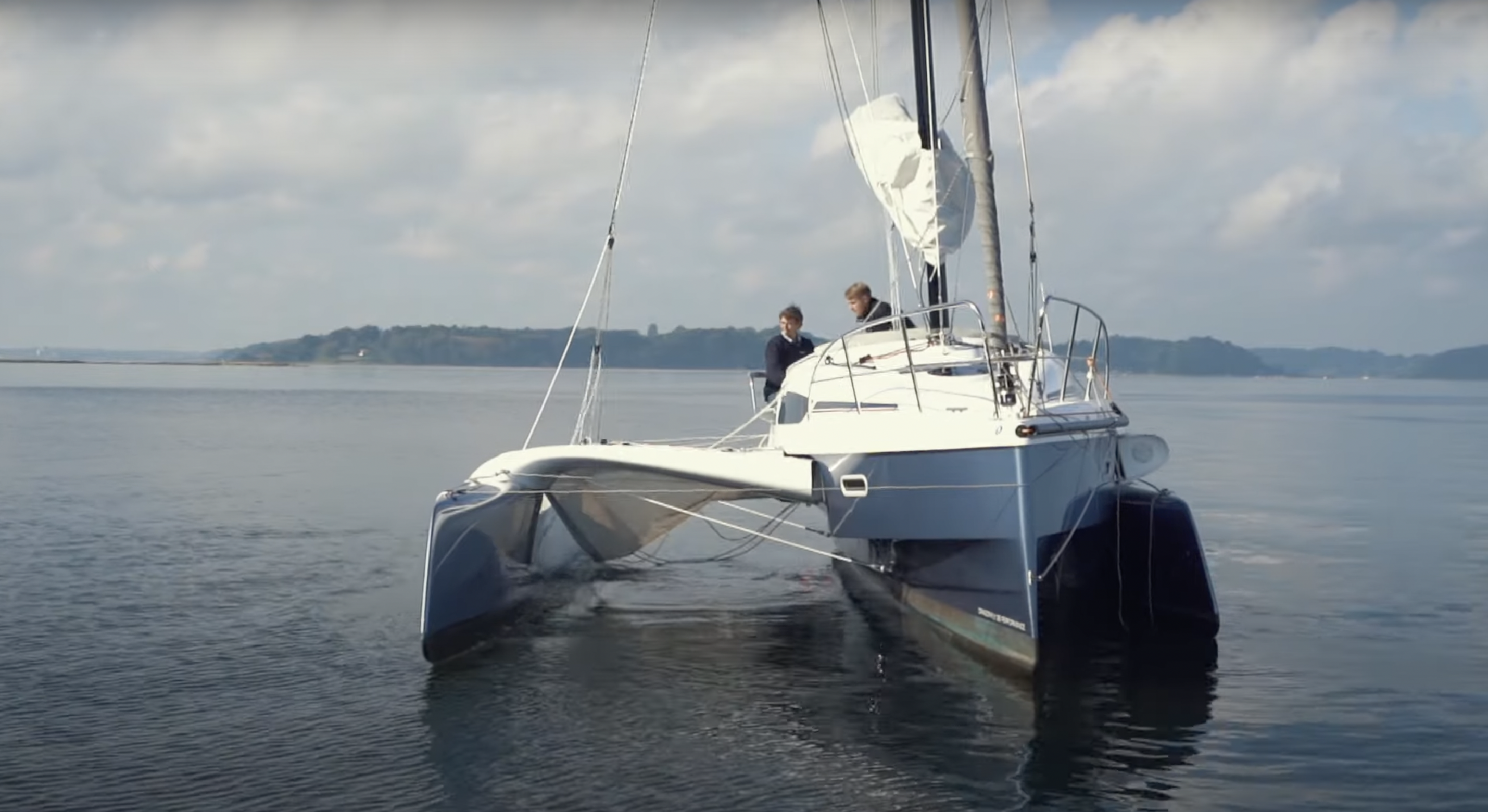 Here is an in-depth guide to using the Swing Wing System on a Dragonfly Trimaran, including how everything works, the backup safety system, tensioning the backstays and folding the hulls in.

END_OF_DOCUMENT_TOKEN_TO_BE_REPLACED 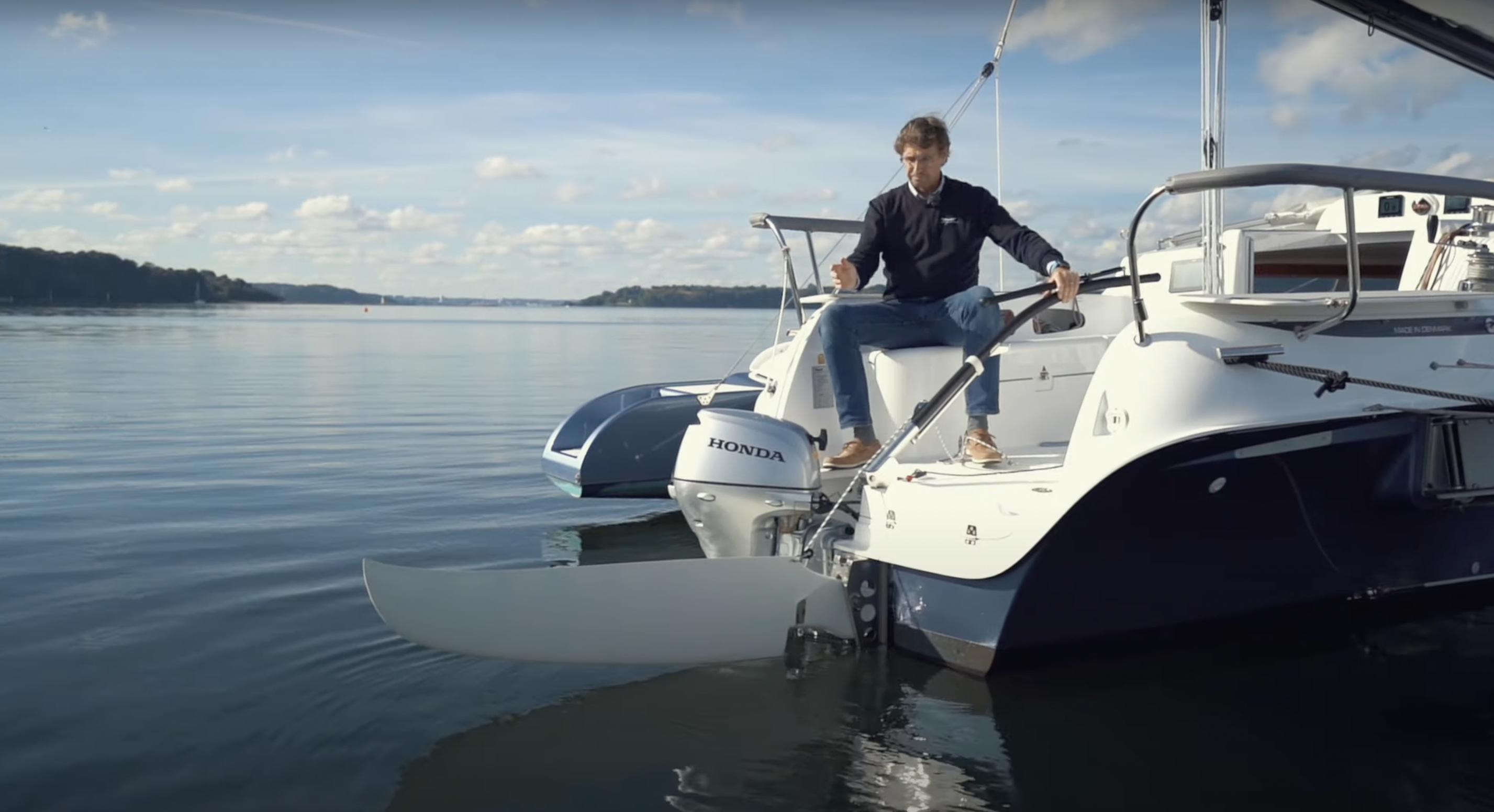 Here is an in-depth guide on how the Rudder, Outboard Motor and Centreboard Systems work on a Dragonfly Trimaran.

END_OF_DOCUMENT_TOKEN_TO_BE_REPLACED 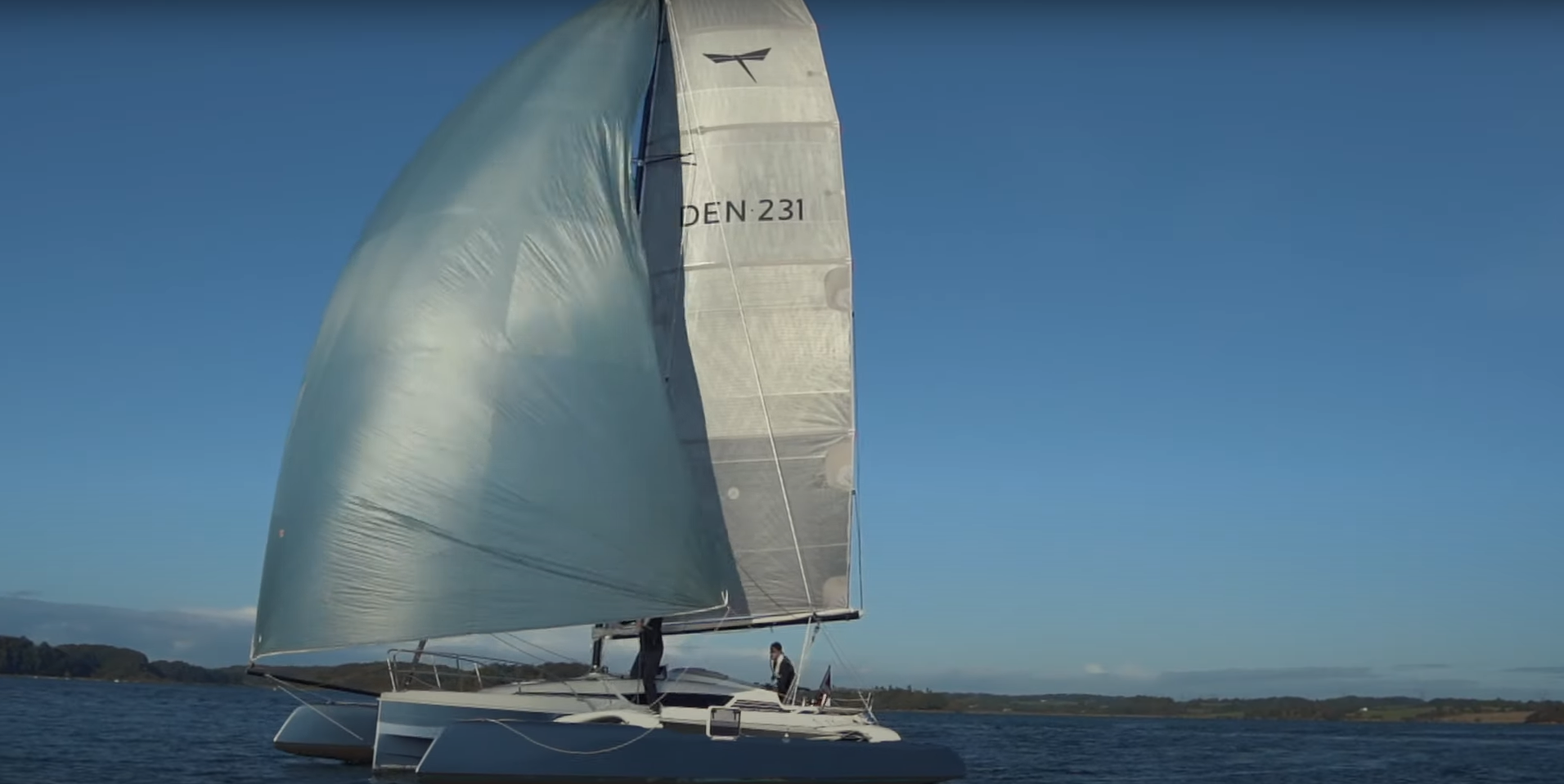 Here is an in-depth guide to sailing on a Dragonfly trimaran on a reach, including how to use the boomvang system and how to set-up the barberhaul headsail system.